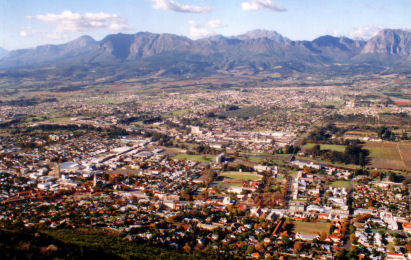 Paarl (Dutch for Pearl) is a town with 191013 inhabitants in the Western Cape province of South Africa. Its the third oldest town and European settlement in the Republic of South Africa (after Cape Town and Stellenbosch) and the largest town in the Cape Winelands. Due to the growth of the Mbekweni township, it is now a de facto urban unit with Wellington. It is situated about 60 kilometres northeast of Cape Town in the Western Cape Province and is renowned for its haunting scenic beauty and deep viticulture and fruit growing heritage.

The area that is now known as Paarl was first inhabited by the Khoikhoi and San people. The Peninsular Khoikhoi people and the Cochoqua people lived in this area divided by the Berg River Valley. The Cochaqua were cattle herding people and among the richest of the Khoi tribes. They had between 16000-18000 members and originally called Paarl Mountain, Tortoise Mountain.

The Dutch East India Company, under the leadership of Jan van Riebeeck, established meat trading relationships with the Khoikhoi people on the Table Bay coastline. In 1657, in search of new trading relationships inland, Abraham Gabemma saw a giant granite rock glistening in the sun after a rainstorm and named it "de Diamondt en de Peerlberg” (Diamond and Pearl Mountain) from which Paarl is derived. Gabemma (often also spelled Gabbema) was the Fiscal (public treasurer) for the settlement on the shores of Table Bay. The "diamonds" disappeared from the name and it became known simply as Pearl Rock or Pearl Mountain.

In 1687, Governor Simon van der Stel gave title to the first colonial farms in the area to "free burghers". The following year, the French Huguenots arrived in the Western Cape and began to settle on farms in the area. The fertile soil and the Mediterranean-like climate of this region provided perfect conditions for farming. The settlers planted orchards, vegetable gardens and above all, vineyards. Thus began Paarl's long and continuing history as a major wine and fruit producing area of South Africa.

The arrival of the European settlers brought on conflict with the Khoikhoi people, as land and water resources began to be contested and the Khoi traditions of communal land use came in conflict with the settler's concept of private property. The Khoi peoples were defeated in a local war and were further decimated by European diseases. The population scattered inland toward the Orange River or became laborers on settler farms.

The district is particularly well known for its Pearl Mountain or "Paarl Rock". This huge granite rock is formed by three rounded outcrops that make up Paarl Mountain and has been compared in majesty to Uluru (formerly known as Ayers Rock) in Australia. However, they are not geologically similar. Paarl Rock consists of intrusive igneous rock, while Uluru is a sedimentary remnant.

Paarl gained international attention when, on 11 February 1990, Nelson Mandela walked out of Victor Verster Correctional Centre (now known as Drakenstein Correctional Centre) in Paarl ending 27 years of imprisonment and beginning the march to South Africa's post-apartheid era and multi-racial elections. Mandela spent three years in prison here living in a private house within the walls. Today, a bronze statue of Mandela stands outside the prison.

Things To Do Around Paarl 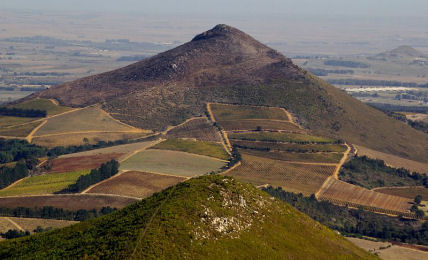 Klapmuts is a settlement in Cape Winelands District Municipality in the Western Cape province of South Africa.

A little town just off the R45 road between Kraaifontein and Paarl, Klapmuts is well known for its surrounding wine farms.

The Afrikaans Taal Museum in Klapmuts is a Georgian-style house built in the 1860s, with many exhibits from Afrikaans theatre, radio and television.

Things To Do Around Klapmuts