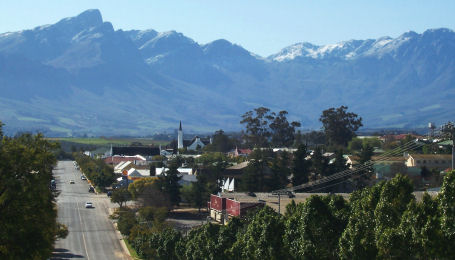 Tulbagh, named after Cape governor Ryk Tulbagh, is a town located in a mountain basin, the "Land van Waveren" (i.e. Land of Waveren or Tulbagh basin), in the western Witzenberg Local Municipality of the Winelands of the Western Cape, South Africa. The basin is fringed on three sides by mountains, and is drained by the Klein Berg river and its tributaries. The nearest towns are Ons Rust and Gouda beyond the Nuwekloof Pass, Wolseley some 15 kilometres to the south inside the basin, and Ceres and Prince Alfred Hamlet beyond Michell's Pass in the Warm Bokkeveld.

The basin has been inhabited for thousands of years by indigenous Bushmen and Khoi peoples. It was about 300 years ago when, after a land grant by the Dutch Colonial Government to a more or less equal number of Dutch and Huguenot settlers to settle the area, that the town of Tulbagh was founded. The town developed slowly and over time and in the period many notable examples of Cape Dutch architecture, Victorian and Edwardian houses and other buildings such as the Oude Kerk (1743) and the Oude Drosdy (the original colonial Magistrate's complex) were built. Many of these lovely buildings were destroyed in an earthquake in 1969 but quite a number survived the catastrophe. Church Street in Tulbagh is now graced by possibly the largest number of Cape-Dutch, Edwardian and Victorian provincial heritage sites in one street in South Africa and remains a major tourist attraction of the town to the present day.

The bowl is surrounded by imposing mountain ranges, the Obiqua Mountains to the west, Winterhoek Mountain to the north and the Witsenberg range to the east, with peaks that rise to over 1,500 metres (4,900 ft). The basin experiences a mediterranean-type climate. The southern side is open to cooling south-east winds during the hot summer months. Accordingly Tulbagh enjoys some of the most diverse and attractive conditions for viticulture in the Cape, and the differences in terroir available to wine makers allow for a wide diversity of distinctive wines of excellence, attributes which have attracted many new producers to the valley.

Wine has been produced for many years in the basin on a commercial scale, but only recently have large advances been made. There are now numerous and some world famous wine estates producing award winning wines. The importance of this industry for the vicinity is unquestionably substantial, so much so that many of the producers are now part of the Tulbagh Wine Route and this is attracting increasing numbers of tourists to Tulbagh who are eager to sample the wines produced by the members. Many new vineyards have been planted and more private cellars are either being planned or built to cope with the expected production volumes of quality wines.

Things To Do In Tulbagh 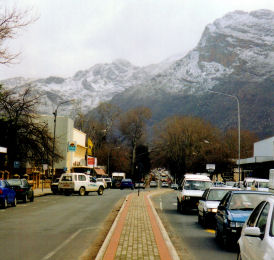 Ceres is the administrative centre and largest town of the Witzenberg Local Municipality in the Western Cape Province of South Africa. Ceres serves as a regional centre for the surrounding towns of Wolseley, Tulbagh, Op-die-Berg and Prince Alfred Hamlet. It is situated in the Warmbokkeveld (Afrikaans: "Warm Antelope Field") Valley about 170 kilometres north-east of Cape Town. Ceres is located at the north-eastern entrance to Mitchell's Pass and was the old route north between Cape Town and Johannesburg, which was later replaced by the N1 highway, which traverses the Breede River Valley to the south.

It was named after the Roman goddess of agriculture, Ceres, a name which is fitting as the valley in which the town is situated is extremely fertile and is a major producer of South Africa's deciduous fruit.

Things To Do In Ceres